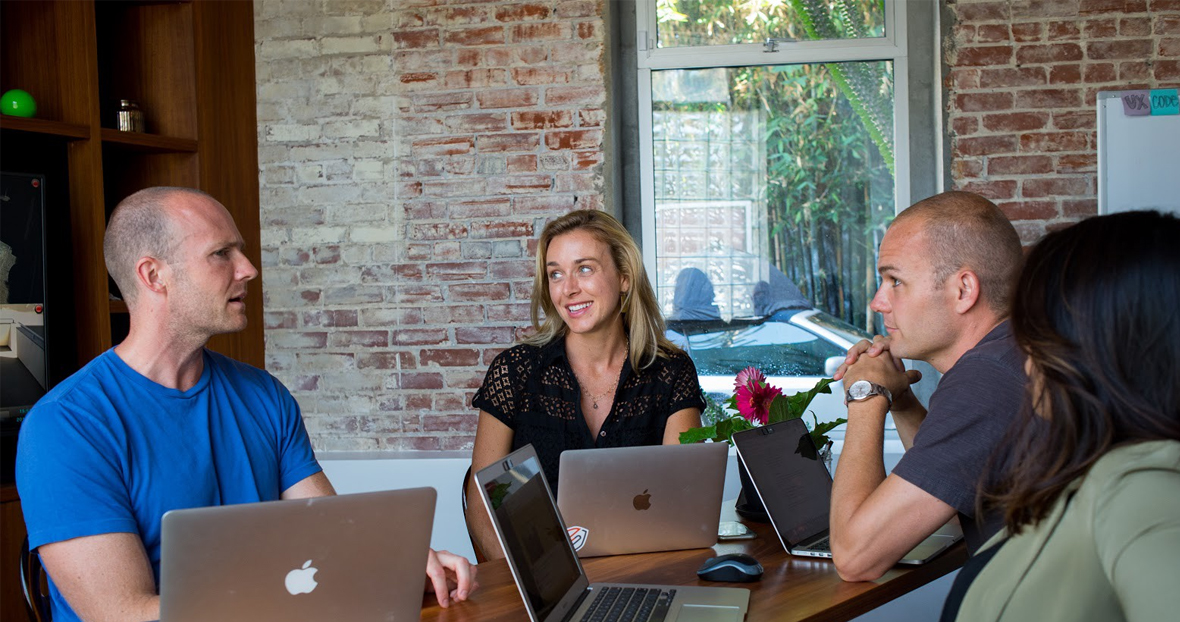 For our first “Team Member Feature” it only seems logical to speak with the first employee of Signal Sciences, Erin Shea. Outside of the three founding partners, Erin was the first hire that Signal Sciences made, and almost two and a half years later, she’s a guiding force in the evolution of our product, and our resident fitness guru.

In 2008 you got a job at Google but quit less than two years later. This was at the height of the economic crash and you’re employed by the hottest company on the block. I’m sure people thought you’d lost your mind but what compelled you to do this?

Wow, that feels like ancient history, but I guess it shaped my career thus far in many ways. I was hired to do qualitative research at Google, but the week before I started, I got switched into a sales-focused account management position. Since it was my first job out of college, I didn’t really understand how different those roles were and I was completely stoked to have any job at Google, so I didn’t question that switch. It became evident pretty quickly that it was not the right position for my interests and strengths, and the urge to do something creative just kept getting stronger. Like I would fantasize about being able to shoot paint out of my fingers and direct it around the room in sync with music. Clearly I needed an outlet, but I had no idea what having a more creative profession could look like! So, when I quit and moved back in with my parents to take art and design classes when the economy was tanking, many people told me I was making a mistake. It felt important to spend my time doing things that energize me (it still feels important) and I don’t regret seeking that path even though I had a lot of doubts it would pan out.

Fast forward to 2014, I was two thirds of the way done with my MFA in animation from USC Film School. By that point I had figured out that visualizing information with digital media was something I really care about, and it was becoming evident that product design at a tech company might give me the right combo of creativity and building something useful I was looking for professionally. Andrew (my former Google coworker and SigSci CEO) and I reconnected in LA, and he offered me a job as the first designer the next week. It’s been surprising in some ways to return to tech, but working as a designer on a very compelling product and with wonderful people feels right.

Two and a half years ago, when Andrew first explained the idea for this company and the product he, Nick, and Zane wanted to build, how different was it from what you see today?

The idea has actually remained the same, it’s just become more filled in with detail as we build out the product and learn more about what organizations need from a security product today. This stability of vision doesn’t surprise me since I had worked with Andrew before and know his strength in moving towards a goal by tweaking things as needed when more information comes in over time. He’s a very stable but responsive leader. This quality of consistency and simultaneous flexibility is something Zane and Nick really have too, it’s just my first time working for them, so I didn’t know they also had a knack for it when I joined the team. The astounding thing to me is how the more we build out the product, the more use cases we discover for our technology. For example, the core idea was born from a security perspective, but the more we get the product into the hands of different people, they’re telling us how useful it can be to developers, ops teams, etc. It’s really exciting to work on an idea that has so much value for so many different kinds of people and roles.

The astounding thing to me is how the more we build out the product, the more use cases we discover for our technology.

What was it like at the beginning…when you were “officially” the first employee?

The first day I showed up to work at Andrew’s apartment in Venice, in May of 2014, the moving company was delivering a couch and chairs for us to sit on—talk about start-up vibes! In those early days, we would check in multiple times a week as a whole company, and things were incredibly informal. I talked through literally every design choice with nearly the whole company, and if I missed a day or two (I was finishing grad school for that first year), it felt like I had missed a lot. As we started hiring more people, processes naturally formalized, teams formed, and more structure emerged. It’s crazy to think this is still that same company, and there have been so many different eras of Signal Sciences since then, but the culture of being curious, helpful, and failing quickly so we can learn faster has remained. The love of laughing together and cooking for each other at the office (we have a real office in Venice now) is stronger than ever, which is incredibly awesome that it has remained a part of our identity as we’ve grown to nearly 30 people.

It’s crazy to think this is still that same company, and there have been so many different eras of Signal Sciences since then, but the culture of being curious, helpful, and failing quickly so we can learn faster has remained.

Knowing the success rate of most startups, how worried were you that this might not pan out the way everyone had hoped? When did you realize that this was not only going to work but could end up being so much bigger than (you/everyone) realized?

I’ve never focused on the possibility of Signal Sciences crashing and burning, I guess because I’ve felt lucky to be part of the ride from day one, and because I’ve just been trying to improve my skills as a product designer and help the team succeed. Getting the chance to work with such energized and brilliant people has taught me an immense amount about product development, running a business, and quite honestly, how to live a good life, so even if things go belly up, I would be walking away with better skills, priceless experiences, and really good relationships. I still try to just focus on what I can do to boost my contributions and design a more intuitive and helpful product, but I think SigSci’s potential started becoming evident when security teams at leading tech companies began telling us how much our product helps them and paying to use it. We even had someone tell us once: “oh yes, sweet baby Jesus!” in response to a feature we just launched, so that was fun.

Has working with this team or at this company sparked any new interests or passions that have surprised you?

I literally never thought I would work in web security before Signal Sciences, but it’s such an interesting time to be in the industry. The value and insecurity of our personal data makes news almost daily with hacks now getting the spotlight on a regular basis, and working in this field has made me think about data in a whole new way. I also have discovered a surprising love of the engineering mindset. When I joined, I thought of myself as a primarily experimental / artistic person, but I have loved discovering my inner engineering nerd who thrives on a more programmatic and optimization-oriented approach. On the flip side, being active outside (surfing, ocean swimming, trail running, skiing, etc.) which is a long-standing passion of mine, feels more important than ever because of how focused on technical design I am when I’m at work.

The value and insecurity of our personal data makes news almost daily with hacks now getting the spotlight on a regular basis, and working in this field has made me think about data in a whole new way.

At Signal Sciences we provide a modern approach to application security and web application firewalls that DevOps shops love. We wrote a short book on The Roadmap for DevOps and Security that outlines the 4 key areas Security can provide value in a DevOps organization. Get your free copy now!

Signal Sciences Journey and Next Chapter